ChinaJoy 2020 slated to go on after Tokyo Game Show canceled

Published on 7 May, 2020
News Bites
Get updates!
NEWS BITES
Back 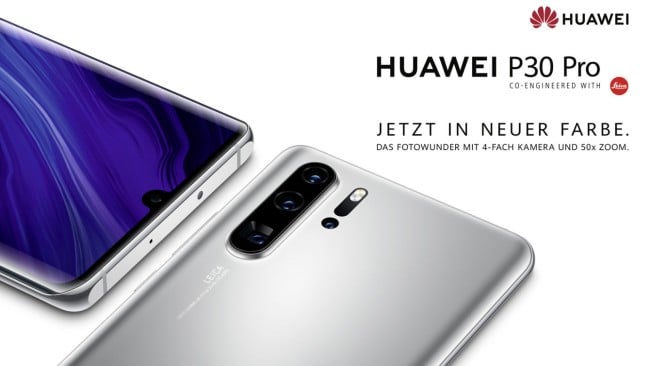 Huawei’s much-praised flagship P30 from last year is getting a New Edition in Germany, and we finally know all the details. It might seem odd for Huawei to rerelease a year-old phone when people can now pick up the newer P40. But the company isn’t allowed to ship the P40 with Google apps since it was blacklisted by the US. The original P30 was released before the ban, so the New Edition also comes with apps like Gmail, Google Maps and YouTube.

Not much has changed with the New Edition beyond adding the Silver Frost color. Like the original P30 Pro, the New Edition has a Kirin 980 processor, 8GB of RAM, four camera lenses that include a 5x optical zoom, and an OLED display. Users don’t get an option for storage, though, as the New Edition only comes with 256GB.

The New Edition costs 749 euros (US$812), which is about US$100 to US$150 more than the original sells for online. To sweeten the deal, the new phone comes with Huawei’s FreeBuds 3 and a Huawei Mini Speaker. For an additional 99 euros (US$107), you can also add the Huawei Watch GT2 to the order. Pre-orders start on May 15, with shipments expected to start on June 1. According to Android Authority, the handset will also be released in the UK and likely other European countries.

The Motorola Razr is an overpriced flip phone with underperforming specs

Can fitness trackers warn us about the next Covid-19 attack?

The Motorola Razr is an overpriced flip phone with underperforming specs

Can fitness trackers warn us about the next Covid-19 attack?