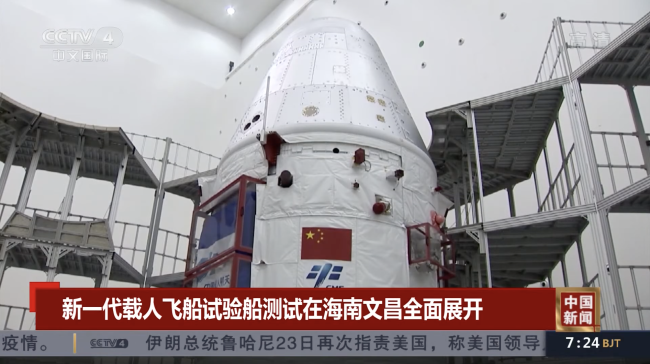 The prototype of China’s new generation of manned spacecraft completed testing on March 25 at the Wenchang Space Launch Center in Hainan. (Picture: CCTV)

Despite the ongoing coronavirus pandemic, China seems undeterred in its preparation for upcoming space missions. On Wednesday, China successfully completed a trial of a new generation of manned spacecraft.

The new spacecraft is designed for both near-Earth missions and traveling to deep space. It can also carry up to six astronauts, according to China Aerospace Science and Technology Corporation. The prototype will be launched without a crew in April and be carried by the Long March-5B heavy-lift rocket, according to state-run news outlet Xinhua.

China’s space missions expected in 2020 include the launch of the core module for its space station, retrieving lunar samples, and a Mars probe, which state media say remains unaffected by the coronavirus outbreak. European and Russian space agencies, on the other hand, are delaying their Mars probe launches by two years.

Why hasn’t China sent astronauts into space for three years?

Why hasn’t China sent astronauts into space for three years?